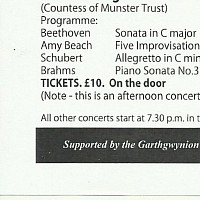 Machynlleth Music Club promotes a series of up to six classical concerts each year. Each concert is held at Y Tabernacl located in the historic town of Machynlleth. Y Tabernacl is a favourite amongst professional musicians and has been described as ‘one of the most wonderful halls for chamber music in the world!’ having marvellous acoustics. The venue is also used for recordings and live broadcasts by BBC Radio 3.

For annual membership details click here. Alternatively concert tickets can be purchased on the door.

PLEASE NOTE: we are currently unable to take electronic payment so cash or cheques please. Thomas Mathias is a violinist from Aberystwyth, Wales, currently studying at Indiana University Jacobs School of Music, USA, with the legendary pedagogue Mauricio Fuks. Recently named a winner of the Royal Philharmonic Society’s ‘Julius Isserlis’ Scholarship for overseas’ study, Thomas is a Master’s graduate of the Royal Academy of Music, where he was awarded the prestigious ABRSM scholarship along with a DipRAM for outstanding performance. Prior to the Academy, Thomas studied at the Royal Northern College of Music, winning the major violin prizes during his time there. Thomas is also a past winner of the Urdd National Eisteddfod Instrumental Competition. Past teachers include So-Ock Kim, Alexander Sitkovetsky, Leland Chen, Deirdre Ward, and Isobelle McGuinness.

Pianist Dominic Degavino has performed concerts in venues across the United Kingdom and beyond, including solo performances at the Wigmore Hall and Southbank Centre, London as a Park Lane Group artist, at the Bridgewater Hall, Manchester and the Lichfield and Edinburgh festivals, among others. Concerto appearances include performances with the Manchester Camerata and RNCM Symphony Orchestra.

Having completed both school and undergraduate studies in Manchester with Helen Krizos, at Chetham's School of Music and the Royal Northern College of Music, he recently graduated from the Guildhall School of Music and Drama, where he studied with Charles Owen and Noriko Ogawa.

Dominic has achieved considerable competition success, including winning the RNCM Gold Medal Competition, 3rd Prize at the Concours International de Piano d'Epinal in France, and keyboard section prizes of both the Tunbridge Wells International Young Concert Artists Competition and the 2017 Royal Over-Seas League Arts Competition. In 2020 he was accepted onto the Tillett Trust DEBUT recital scheme, and he is currently also a member of the Countess of Munster Musical Trust recital scheme. He has taken part in masterclasses with eminent pianists such as Lang Lang, Richard Goode, Imogen Cooper, Peter Frankl and John O'Conor.

Alongside work as a soloist, he is a passionate chamber musician, accompanist, and jazz player, performing extensively and winning prizes with a wide array of ensembles, including the Mithras Trio (current BBC New Generation Artists) and with flautist Meera Maharaj.

Programme to be announced